) is the castle and the eighth level of Freezeflame Glacier in Newer Super Mario Bros. Wii. It's a water-filled castle featuring Skewers, Spiked Balls, and icicles. Pyro and Cryo are fought at its end.

Chillsear Castle is unlocked by completing Glacier Lavalake or Lavafrost Cavern, both in Freezeflame Volcano. Completing it will unlock Snowdrift Airship.

The boss battle here remains the same as the tower battle, though with a slippery floor. Pyro and Cryo will both hop out of their water or lava pools like normal bubbles, thus beginning the fight. Kamek will automatically provide Mario a Yoshi to use. Pyro will shoot fireballs, while Cryo will shoot ice balls. You must use the Yoshi to swallow either a fire or ice ball, and spit it at the opposite element, or you can use powerups to attack them. The damaged bubble will shrink in side. You must take either Pyro or Cryo down three times. When one of them dissolve, the remaining Bubble will run away, ending the battle. 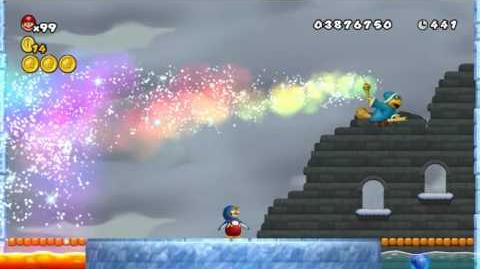